When programming in a language like C, assembly, or even machine code, we treat memory simply as a huge, linear array, uniformly accessed at all locations. While this is an incredibly useful abstraction for most software, for performant programs it is a very naïve view of things. Critically it ignores the presence of caches. 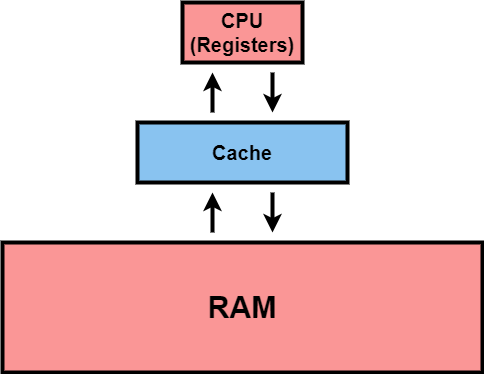 A fundamental tradeoff of memory is that bigger memories are generally slower to access. So while gigabytes and gigabytes of RAM are wonderful for storing lots of useful data, actually accessing that data is cripplingly slow, taking hundreds of CPU cycles. This in combination with the fact that practically all programs are constantly manipulating data means that we are being massively bottlenecked by memory access latency.

The solution* is to have a second smaller (and thus faster) memory, situated between the CPU and RAM, which stores data that we are likely to use in the future so that overall access latency is decreased.

If we can work within the confines of a single cacheline, we will only do L1 cache accesses, increasing the speed of our program dramatically.

Most modern CPUs actually have multiple layers of caches, but we can ignore these and just program for the highest level of cache. It’s also interesting to note that CPU registers are at the extreme end of the size-latency tradeoff, being tiny but ridiculously fast to access.

I won’t go into too much detail on the sorting algorithms (their Wikipedia pages are good resources), but we can compare their cache performance and running times.

Merge sort has an optimal running time of O(nlogn), but it can potentially have bad cache performance due to not being an in-place algorithm: we repeatedly move data between two large arrays, which can cause cachlines to be repeatedly moved in and out of the cache from memory.

Insertion sort has a terrible running time of O(n2), but it sorts in-place, so if we sort an array that resides within a cacheline, we will not have to evict or retrieve any new cachelines and will thus have awesome performance.

We can combine these two algorithms into one, to get the best of both worlds while minimising their respective drawbacks. I will take excessive creative liberty and name this new algorithm CoolSort!***

We start with an unsorted array of integers, and conceptually slice it into subarrays of the size of the system’s cachelines (64 bytes on most CPUs). Be careful that the array itself is cacheline-aligned, otherwise in doing this we would be purposefully sorting across block boundaries, thrashing the cache.

We then run insertion sort on each subarray individually.

Each subarray is now ‘locally’ sorted, having been done so extremely quickly due to working only within a single cacheline.

A happy coincidence is that mergesort’s merging step has only the precondition that both input arrays are sorted. In standard mergesort this is the output of a previous merging step (or two single-item arrays), but it doesn’t have to be.

Using this information we can simply run a standard recursive merge, except that we start by merging arrays of cacheline size instead of single-item arrays. We then end up with our sorted array.

We preserve our O(nlogn) running time as well. We can deduce this by analysing each step individually, the insertion step then the merge step. While insertion sort is O(n2), each subarray is a constant size, so the sorting of each subarray is O(1). The number of subarrays is proportional to the size of the array, so the total running time is O(n) for this step. The merge step is exactly the same as in a standard mergesort, except we remove a constant number of layers from the bottom of the binary tree of merges. Thus this keeps its O(nlogn) running time. As the two steps are performed in sequence, the overall running time is O(n+nlogn)=O(nlogn).

The insertion sort function, with compile-time constants defining the number of integers in a cacheline.

And the very simple composition of the two.

Here are the results of some crude testing, just to give a rough idea of actual performance. The program was compiled using GCC’s -O3 optimisation level, and testing was performed on an Intel I5-5300U CPU (spec sheet).

Arrays of increasing powers of 2 were sorted, with measurements taken using the Unix time tool.

The logX-Y and X-Y graphs include Insertion sort for comparison of asymptotic running times, but make it hard to compare Mergesort and Coolsort, which is what we’re interested in. 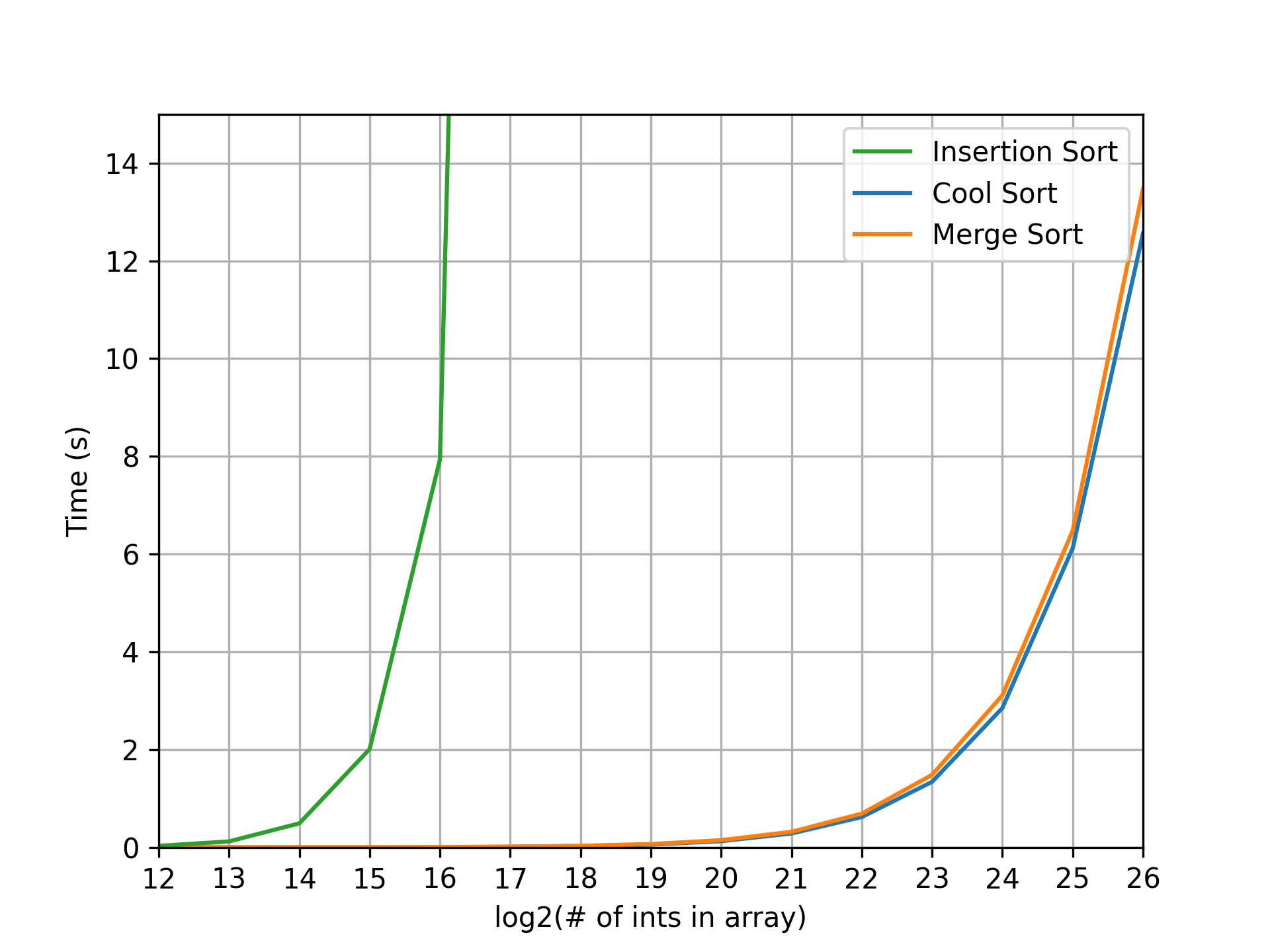 The X-Y graph in particular highlights just how bad a running time of O(n2) really is. 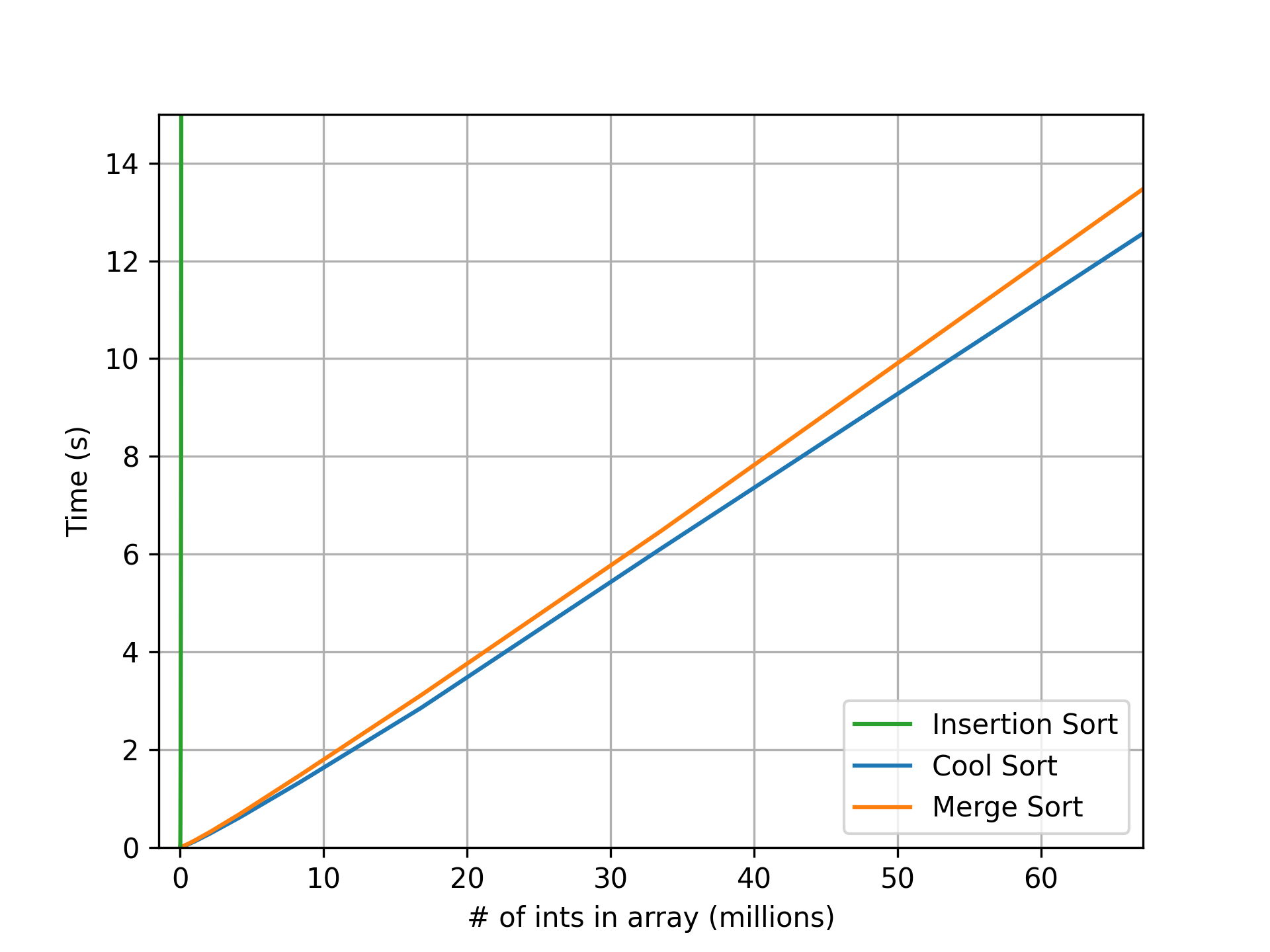 We plot the execution time of Coolsort as a percentage of Mergesort’s execution time to better compare the two. We see the error on both measurements by the light blue bounds, showing the lack of precision of the timer. 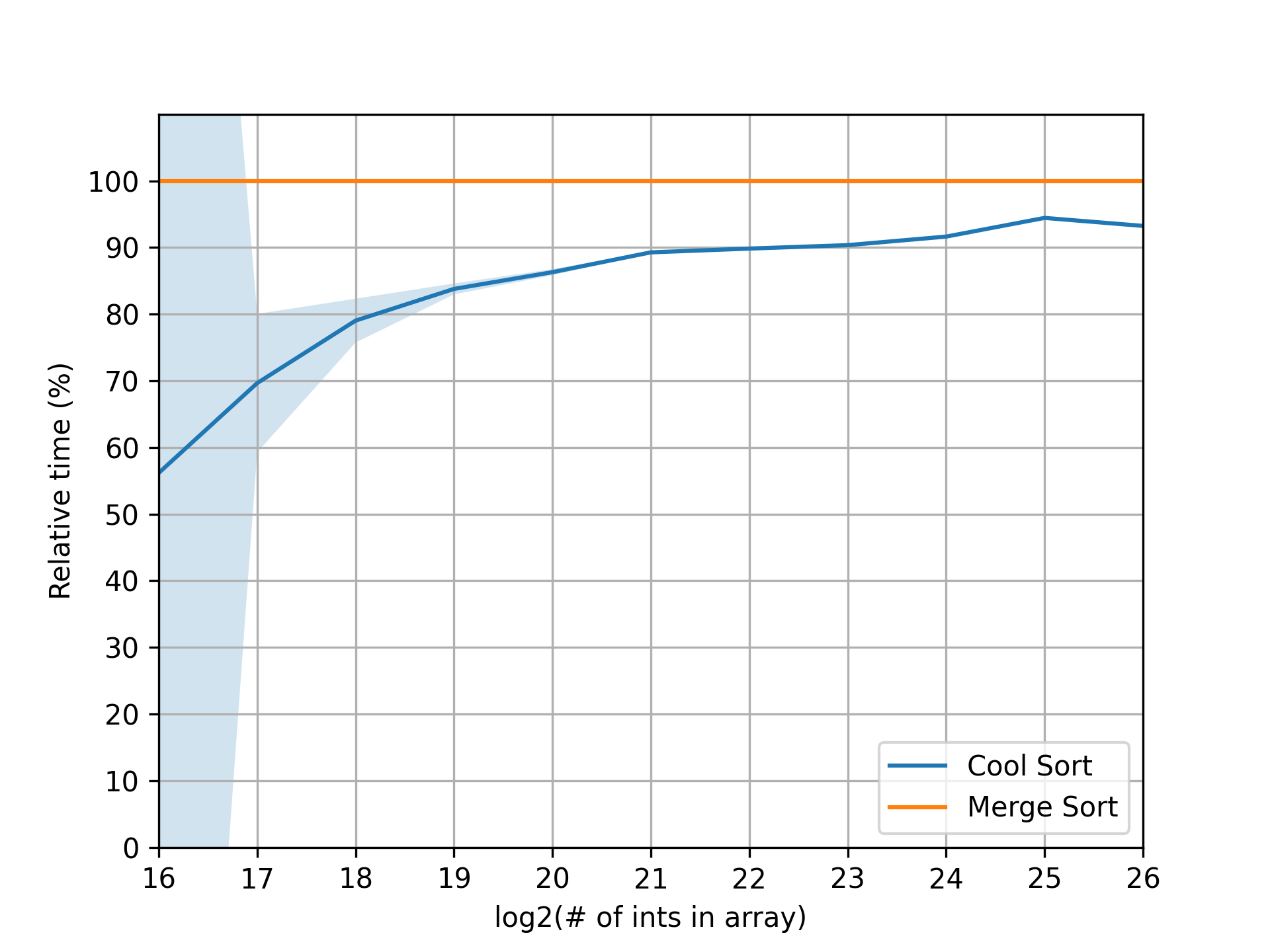 We can see that Coolsort is reliably between 80 and 95% of the running time of Mergesort, which is a comfortable improvement.