Bezier curves are a rather nice looking model of parametric curves, and while they undoubtedly have many practical uses, I mainly just like the look of them (especially when visualising the construction process), so what I’ll be writing is an almost screensaver-like program that randomly generates bezier curves, and draws them over a period of time, until it finishes and moves onto drawing the next random curve.

Note: I will be using Python, with the Pygame library for 2D visuals, but all of the code can be generalised to any language and graphics library.

Despite coming from a relatively heavy area of maths, the wikipedia page for bezier curves gives a surprisingly intuitive idea of how they are constructed, and was actually the inspiration for writing this program.

I won’t go into any of the maths here (probably because I don’t actually know any of it), but instead show my solution to the problem. (Before continuing, please do look at the Wikipedia page, since I won’t be going into detail about what bezier curves actually are).

To construct the curve, we first need an ordered list of ‘construction’ points (I’m making up notation as I go along, bear with me). These points will be completely stationary as the curve is constructed. 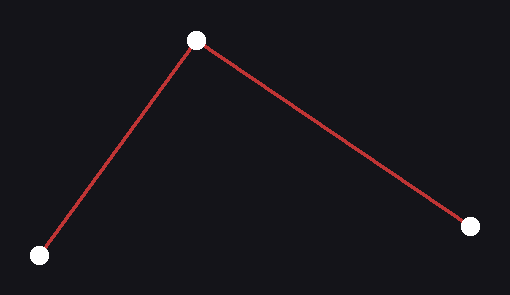 Again, the Wikipedia article does a very nice job of showing this.

This is all fine and good by itself, but what happens if we do it again? why not repeat the process of interpolating a ‘child’ point between two ‘parent’ points for this layer as well?

It turns out that even though the ‘parents’ may not be stationary, we can still interpolate between them for whatever position they are inat that point in time, irrespective of where they were previously.

When we hit a layer with only 1 point however, we have to stop. While this lone point may seem like a bit of a party pooper, it is actually the one thing we were trying to find in the first place.

As the curve moves through the [0, 1] interval, the path of this point is what actually shows us the bezier curve, and so I call it the ‘drawing’ point.

At each of our discrete time-steps, the positions of the points are calculated from the top ‘construction’ layer downwards, as each layer is dependent on the layer above. The position of the drawing point, once calculated for that time-step, is added to a list containing all of the previous positions of the drawing point at their respective time-steps. Once t = 1, and all of the child points have fully moved from one parent to the next, all of the points in the list of previous drawing point positions can be connected up, one to the next to form an approximation of the bezier curve. 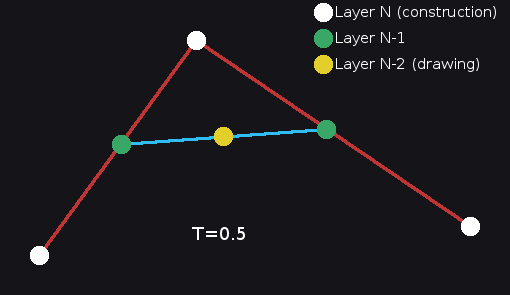 I’m going to be writing the source in an almost pseudo-code sort of way, to get the general idea of how it works without having to write all of the boilerplate and glue code.

First we need a way to linearly interpolate between two points based on a parameter t.

(We call it ‘lerp’ because it is linear interpolation)

After this, it’s a simple matter of creating a list of top layer ‘construction’ points, assigning each adjacent pair a child point, then repeating for each subsequent layer until reaching the ‘drawing’ point. This can be easily generalised to any starting size (otherwise known as the ‘order’ of the curve).

(Fun fact, python lists are mutable out of scope so don’t have to be passed back out of the function, be careful of this though!)

To get the drawing point’s history of positions, at each time-step it’s resultant position is added to a list.

And finally, here is the main loop. I’ve omitted all of the graphics code because it’s not too relevant.

Drawing the curve can either be done at the very end, after all of the computation, which would give a static image, or in parallel with the computation, so you would see it drawn over time. If you did this you would have to include some sort of sleep call, otherwise you wouldn’t be able to see the process of the curve being drawn as it would happen so fast. 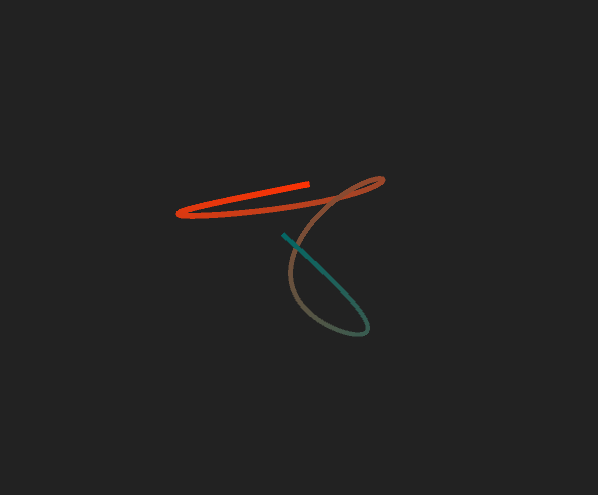 And that is all! I hope some of that was useful, and I would recommend attempting to implement it if you have the time.